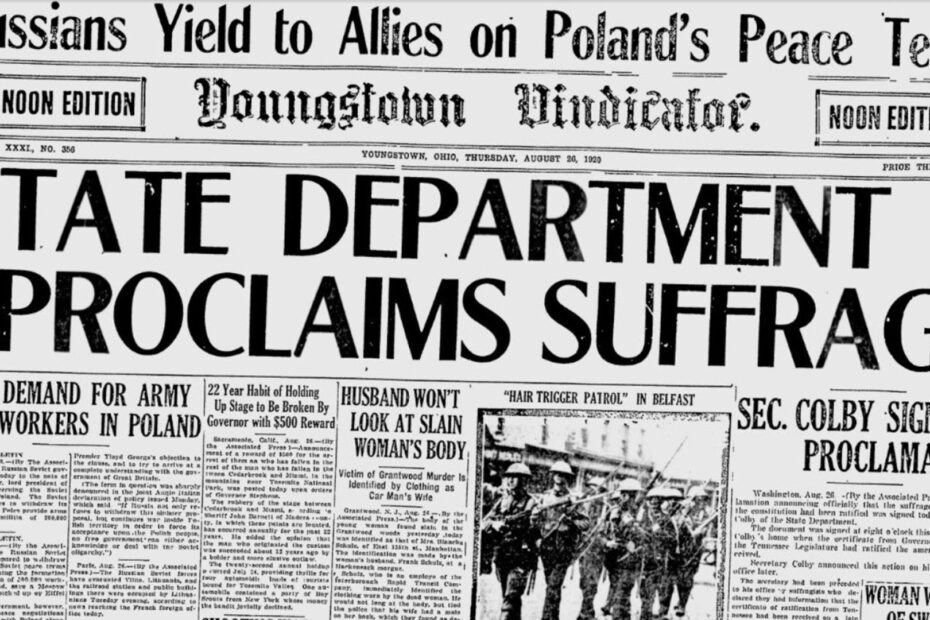 One hundred years ago today, women in America, for the first time, were assured the right to vote as the 19th Amendment to the U.S. Constitution, ratified about a week earlier, was certified.

Their journey to achieve that right was a long one, fraught with prejudice and bias, even from most of the men they loved and cared for. They suffered beatings, imprisonment and forced feedings through tubes stuffed down their noses as they were restrained by prison guards — all men — still hellbent on preserving the patriarchal society that granted them absolute power over every woman in their lives, including those older and wiser than themselves — their mothers, their aunts, their grandmothers.

There were, of course, a few enlightened men, without whom their achievement could never have been reached, but ultimately, it was the press that won them victory.

In honor of this day, I urge every American — not just women — to watch “Iron Jawed Angels” to learn about the very difficult path trod by your female ancestors to claim for themselves and all us future generations of American women the rights and recognition promised in our Constitution to every American, but denied to them until they rose up together.

I am reminded, as this highly charged, crucial presidential election approaches, of both the current administration’s unconscionable discrediting of the press and those suffragettes’ sacrifices, fears, frustration and confusion, wondering, before the amendment’s passage, if the men in their lives really valued their existence, their love, their care, enough to consider them equal, vital and important enough to support their struggle. Americans of color, particularly the icon we just lost, Congressman John Lewis, know that struggle well. And as we head toward November, in this era of COVID-19, many Americans — of all colors — are now fearing that their voting rights are threatened — even 100 years beyond our government agreeing that women are equal enough to have a voice in who governs their lives.

I hope we have the fight in us that those American heroes, civil rights leaders Lewis, Rosa Parks, Harriet Tubman, and Ida B. Wells and Sojourner Truth — who fought dual battles for women and blacks — and suffragettes Alice Paul, Elizabeth Cady Stanton, Susan B. Anthony and Warren’s own Harriet Taylor Upton were able to muster in themselves. Because I believe, as my beloved Baha’i Faith teaches: The happiness of mankind will be realized when women and men coordinate and advance equally, for each is the complement and helpmeet of the other. And that cannot come without full and equal participation in the election of our leaders — and the assurance that every one of our votes can be safely cast, and counted.

Cynthia Rickard
Editor, No Holds Barred
Cynthia started a 41-year career with The Vindicator in Youngstown as a news reporter, and served as the paper’s first and only Warren Bureau Chief and Trumbull County columnist, then as Trumbull, Columbiana and Pennsylvania, and City editor, and was night and online editor when the newspaper closed its doors Aug. 31, 2019.